Front Garden Grow Your Own

April 07, 2018
Introducing our garden equivalent to the messy cupboard. You know the place where you shove all the stuff you are not sure what to do with, this is the same but in our front garden. The problem is we look at this every day from our kitchen window. 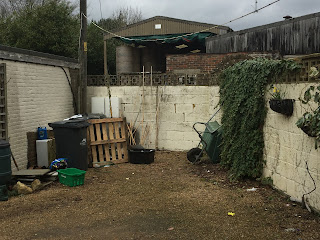 Time for action, we moved to this house as its fairly rural, we wanted space to grown some veggies and have chickens. Its now 7 years later and we have not done any of it.

We sorted the area and Mr MC&W went off to the tip with a boot full of rubbish that we had been hiding including an old washing line. As you can see the ivy has remained, this was meant to go but we checked for nests and found a blackbirds nest, so we have left it alone allowing them to raise their chicks.


We decided the way forward is for raised troughs, they are higher meaning we can easily see from the kitchen window. In order to maximise the space we have, we found three different sizes of troughs to see what worked best and measured them out using bean poles, you could actually see how they would fit much better than just a tape measure. This was very important in a small space, if not measured properly they may not have fitted and that would have been such a waste of money.


We are not trying to be self-sufficient but what we want to grow is a small selection of veggies we like to eat and the children will be interested in. I will also be growing some flowers to add interest and colour.


I have been looking at catalogues at ones that grow well in pots as in essence, this is what we are doing. It will be a real leaning experience for us all.


We have not really done too much grow your own, though I must confess my mum is amazing and we grew up stealing peas and strawberries from the garden and being sent out to dig potatoes. I have a source of great knowledge to lean upon along with the awesome gardeners on twitter who share their expertise so kindly. I will share our adventures, let's hope its more successful from the seeds for flowers I planted last year. 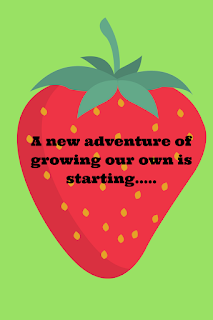 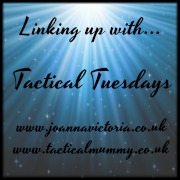 Popular posts from this blog

January 11, 2019
It is funny how quickly life gets back to normal after the Christmas festivities. We are all back to school and we all have a new cold to fight off. What is lovely is that the days are slowly getting longer.

Monday - Chicken, mozzarella and pesto parcels the boys will have tuna puff slices and I will use puff pastry for both

Tuesday - Super smokey bacon and tomato spaghetti for us all

Wednesday - Prawn paella - kind of made up and will be sharing what we do. This will be for us all.

Pruning a Standard Rose by a total gardening novice

January 28, 2019
The weather has suddenly started to feel like winter. Today was cold but at least it was sunny, much easier to wrap up warm and get outside. My problem is my toes, they do hate the cold and despite two pairs of socks I still only managed around half an hour.

Today was the day I pruned (it felt more like attacked) the standard rose, we brought this about two years ago. Mr MC&W fell for bits big pink flowers and it came home with us. Then it was a lovely compact rose full of beautiful flowers.

Last year I did not prune it and to be honest it looked a mess, the branches had grown long and were trailing. When it was windy the whole plant nearly fell over.

This year I was determined to do something about it, I did a few google searches and I watched an excellent video from the Garden Ninja on YouTube. He made it all sound very simple so off I went with my secateurs and enthusiasm.

All I had in my mind was cut to outward facing buds and remove dead wood. So I looked carefully and chopped do…
1 comment
Read more

March 02, 2019
The children's slide and swing set was beginning to make some rather dodgy creaking noises, as they spend most of their time on the trampoline we decided to take it down.


Our first thoughts were, we would chop it down to manageable sizes and take it to the tip, then Mr MC&W had a rather good idea. The wood was not too bad, could we use it to make better edges to the garden borders? As you can see on the photo below, we had a sleeper that marked the border with the patio, we never really liked it as it was too big and there was nothing else between the border and the grass.


We managed to remove the sleeper and save some of the pegs then used 4 posts to edge the whole new border, Mr MC&W cut them to angles so they join well. We are really happy with the end result. We even had enough wood to make a border by the shed that needs a lot of work but at least it has a nice edge.

Promote Your Page Too